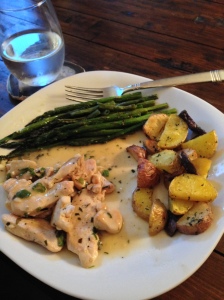 This is one of the only recipes I actually like that is based on a master recipe from the Whole30 program. I followed their directions once and tweaked it the second time and I preferred that version, which is here. To be fair, I haven’t tried all of their recipes (after 2 bad ones I completely gave up and have made up all of my own since) but of the ones I have tried, this one and a slightly modified version of their chili which I will post soon, are the only 2 I’ll make again.

Heat olive oil in a skillet over medium heat. Sprinkle sliced chicken with salt and pepper then brown in a single layer for about 3 minutes per side until golden brown, remove from pan.

Add 2 cloves chopped garlic to the pan as well as the sliced mushrooms and green onions. After about 15 seconds, add 1 cup of chicken broth and 1/2 cup of coconut milk and deglaze the pan (scrape the brown bits off of the bottom).  Allow mushrooms to cook for a few minutes until soft and then add tarragon and chicken back to the sauce and bring to a boil. Lower heat and simmer for 5-10 minutes until sauce has reached thickness you want, I like it to just coat the spoon when I pull it out of the sauce. This dish is great with roasted veggies or potatoes as a side. It’s also really good heated up for lunch the next day which makes lunch at work a little more enjoyable than just a salad. Enjoy!